Sitting Down With Siren’s #1 Fan

April 11, 2017
All Categories Blog In The News Events Product Updates

To hear Ethan Dow's description of his fascination with the inner workings of boats is an experience in and of itself. Ethan is, in his own words, completely addicted to marine electronics.

"I always was an early adopter of anything that had wires or plugs in it. I don't care what it is – that became my passion."

With an impressive sailing career already under his belt, Ethan set his sights on a new challenge. Ethan had employed early generation plotting software while sailing, but it was his introduction to power boating, and subsequently fishing, that opened Ethan's eyes to a whole new world of electronics. He has never looked back. 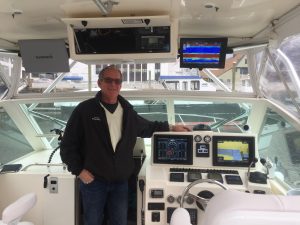 "The first thing I got was a Tuna – and that was it for me, the bug was planted. So along with the transition from sailing to
fishing comes a whole new aspect of marine electronics. Now I want to know what's under me, what's going on around me. So now I need the best sounder on earth. And then I needed more, more MFD's [Multi-Function Displays]. And then NMEA 2000 came along and suddenly all the electronics were speaking the same language."

You can hear the wonderment in his voice, and see it in his eyes. This is a man who lives and breathes electronics, who understands how they work at their very core – and Siren is at the top of his list.

"I searched and searched, and I think it was Ben [Ellison] who introduced me, through Panbo, to Siren Marine. The minute that came out I had to have it. I had to protect my investment. Once I got that…it gave me the same serenity that I received when I first got GPS – the same serenity that I need knowing that my boat is protected. I know where it is, what it's doing, how it's feeling, if anybody is stepping aboard."

There is no doubt in Ethan's mind of the quality of Siren's product, and he makes it known to everyone that will listen.

"When somebody makes a nice product, I tell them about that on the web. Everybody is always asking, so I'm always going to pump up a good product. It really is something."

"What sets Siren apart? As we know, other systems are exorbitantly expensive. Less value, fewer inputs, they're just…antiquated. Siren nailed it the first time, and I knew you had something good. So I told my friends and they told their friends, and onward it goes. I'm just absolutely thrilled about your new module. The other companies don't deserve to be there. They didn't stick their necks out, put their back into it, their investment into it…their heartsinto it. No one had the thought, the technology, the foresight that Siren has. There is nothing better out there. There really isn't. And it will be really hard to beat."

High praise from a true connoisseur, and Ethan claims to have good reason for his commitment to Siren. 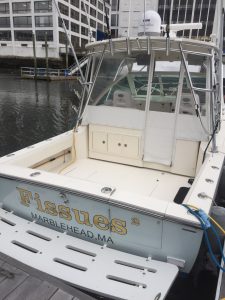 "I was out at 3 am, headed towards the fishing grounds, and it was blowing hard. Had to have been 10 foot seas, and my boat handles it fine, does wonderfully. I heard this…this racket on the radio, and realized 'Jesus, it's a mayday.' So I get his position, and the Coast Guard was closer, but I think, 'Wow, this guy is in trouble!' I can hear him on the radio, and I'm thinking, 'Geez, what's all the racket about? And then I hear his alarm going off!'"

"But then I realized that he had keyed off his radio already. I looked down, and it was my phone. My phone telling me the bilge was going off. It wasn't his alarm, it was mine. So I go down below, and the seawater hose– it's a two-and-a-half inch hose– was firehosing and filling the boat. And the only reason I was saved was because of Siren Marine. It saved my life, right then and there."

"So then I put in a high water alarm," Ethan says with a smile.

Ethan has retired from competitive sailing, and from electronics installation. He works as a residential contractor on the North Shore of Boston, working his magic on old colonial homes up and down the coast. But he lives to be on the water, and Siren Marine keeps him afloat.

If you're ever lucky enough to run into him at Finz in Salem, maybe you can hear one of his stories for yourself.